Email ThisBlogThis!Share to TwitterShare to FacebookShare to Pinterest
Labels: போராட்டம் 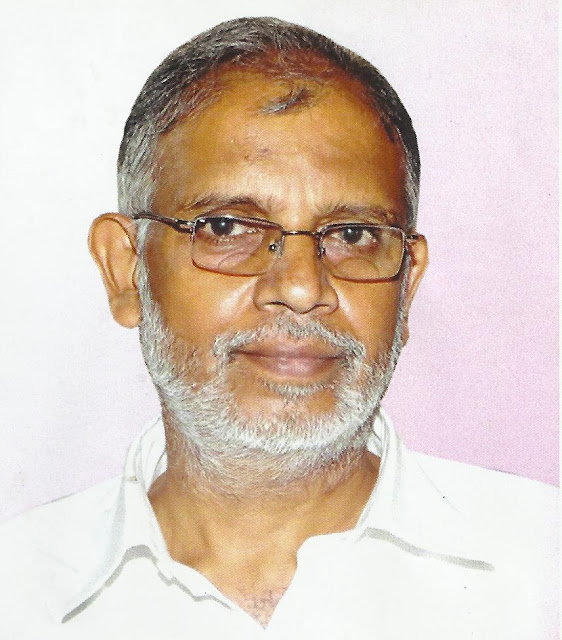 BSNL: BIG LOSSES, BUT CAN INDIA LIVE WITHOUT IT? Email ThisBlogThis!Share to TwitterShare to FacebookShare to Pinterest
Labels: செய்தி

Kerala CGM BSNL transferred – a success for the Workers Struggle.

கேரளா  போராட்டம் வெற்றி
The CGMT Kerala, Shri MSS Rao, has been transferred from the CGM post. Shri Anantharam, Sr. GM, Eluru, has been posted in place.It is a success for the BSNL workers of Kerala. BSNLEU, SNEA and BSNLCCWF have been on struggle demanding the transfer of the anti-worker CGM, against whom many allegations are there about corrupt practices.The Unions have demanded the CMD BSNL to set aside all the suspensions, get withdrawn the FIRs etc in connection the struggle. CMD assured that this will done. Further the committee on wages of contract workers will start functioning from 18th September onwards.The Kerala Circle Unions will discuss and take the decisions about the ongoing struggle.The Hunger Strike against victimisation of Kerala Comrades and other programmes decided in this connection by CHQ of all the three unions has been withdrawn.We Congratulate the employees and workers of Kerala for their steadfast struggle which compelled the transfer of CGM and assuring the vacation of victimisation.
நன்றி

BSNL's Kerala circle has registered a remarkable profit of Rs 486 crore in the financial year of 2014-15 though the central PSU is struggling at the national level, M S Rao, Chief General Manager of the circle, said. "The Kerala circle is performing very well and registers growth in all aspects including revenue and profit. The circle has registered a profit of Rs 486 crore during the financial year 2014-15," he told reporters during a press meet here today. The profit from the circle was Rs 411 crore and Rs 287 crore during 2013-14 and 2012-13 fiscals respectively, he said.
நன்றி Economic Times
Posted by BSNLEUVR at 7:47:00 PM No comments: 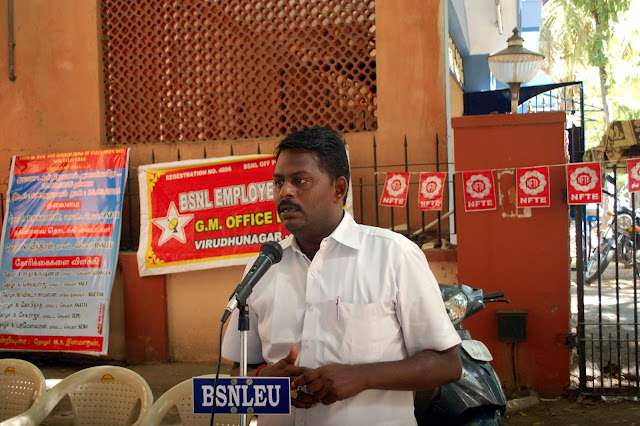 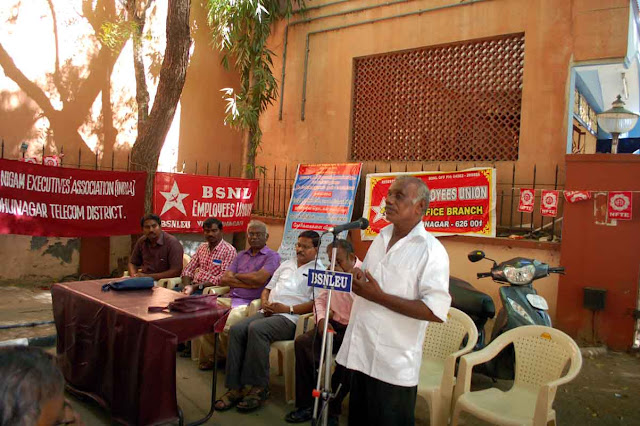 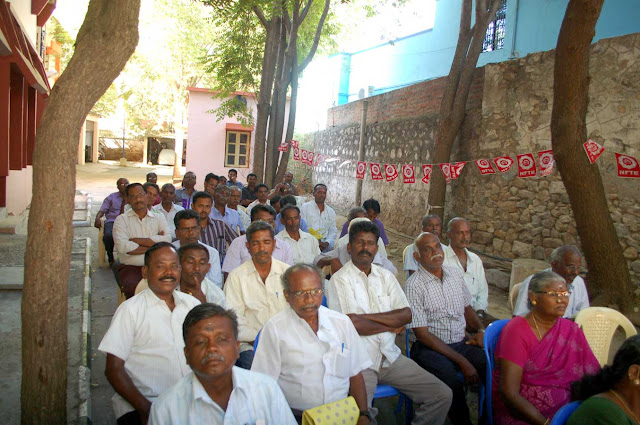 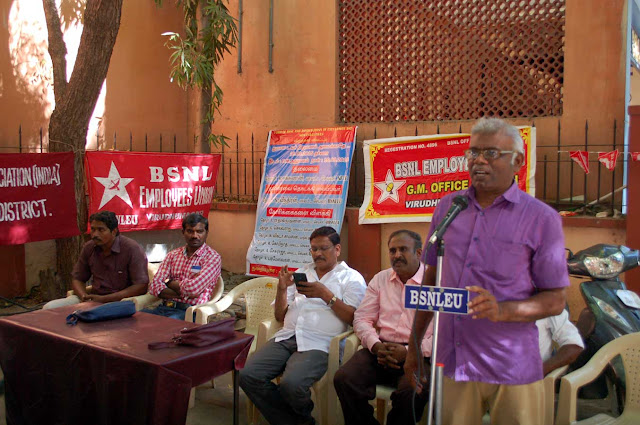 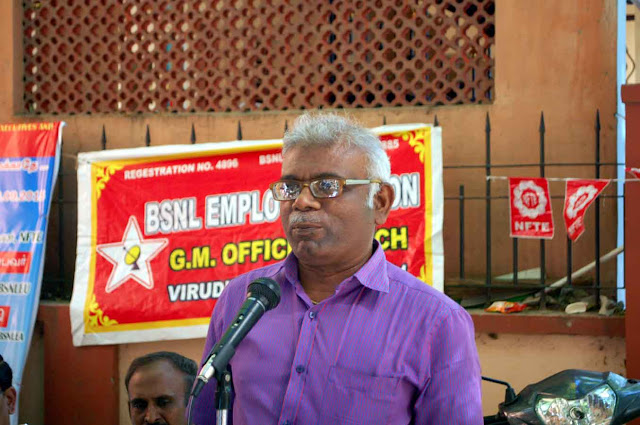 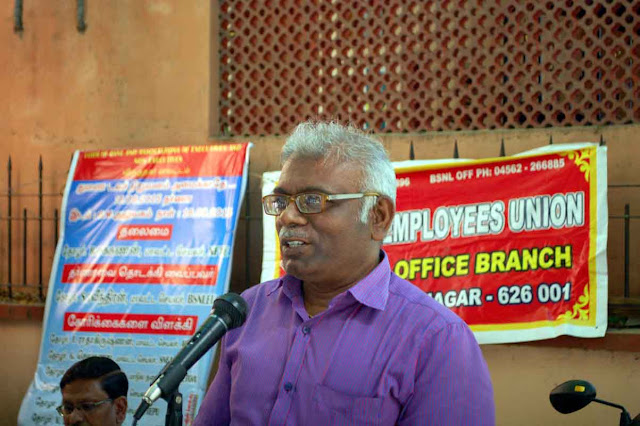 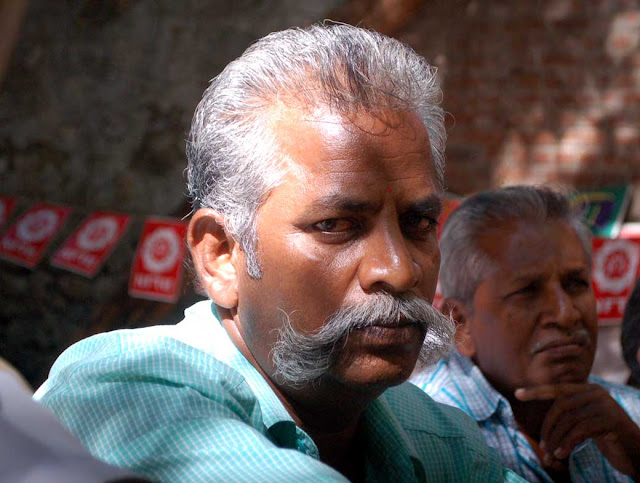 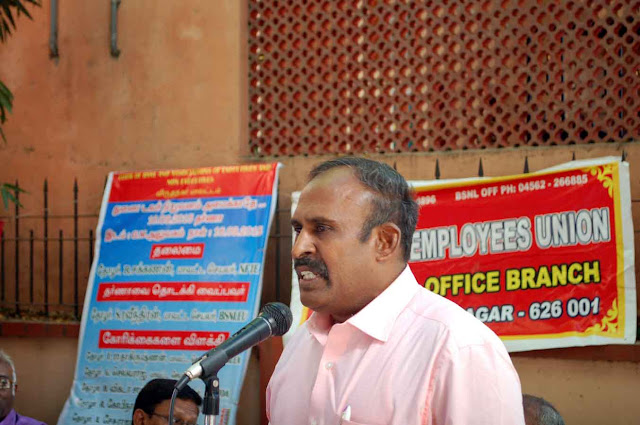 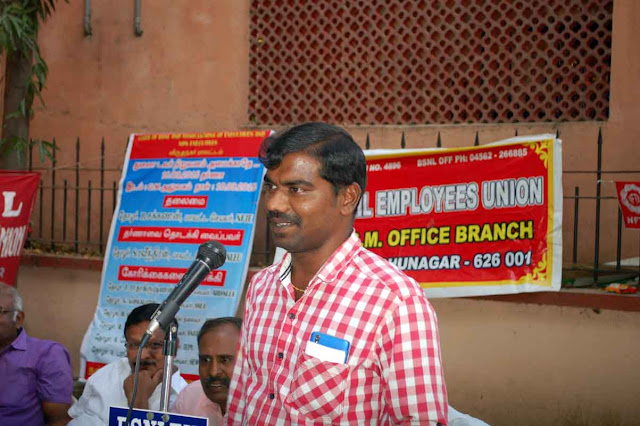 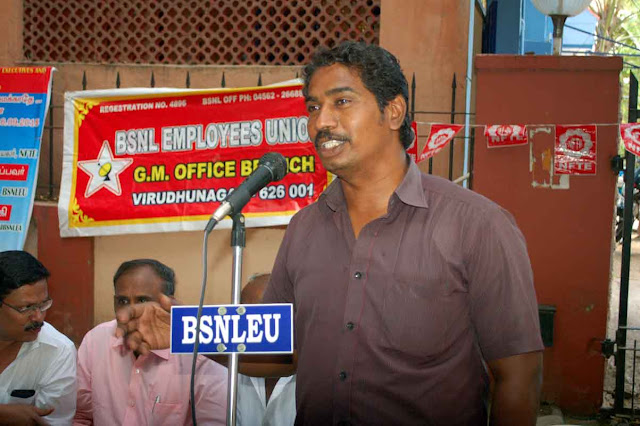 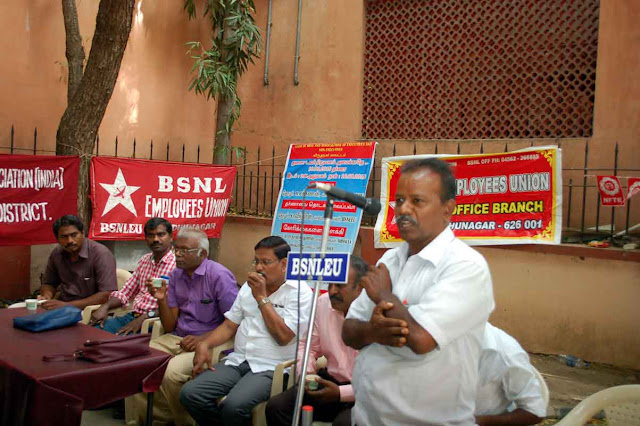 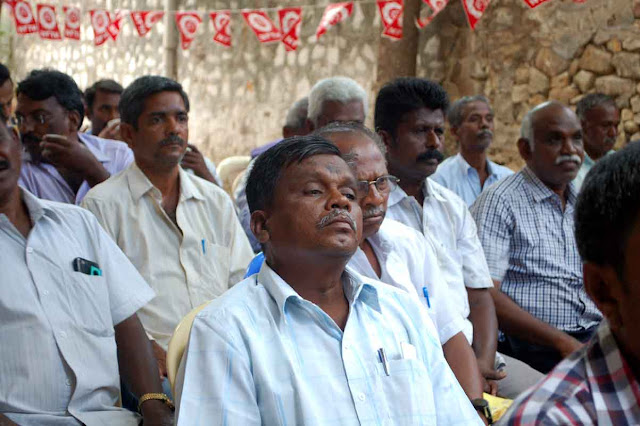 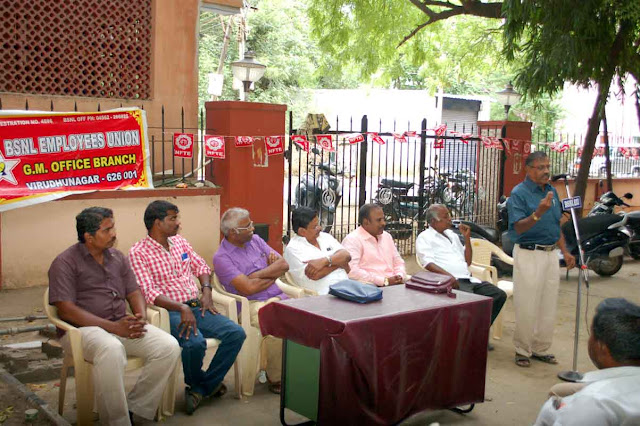 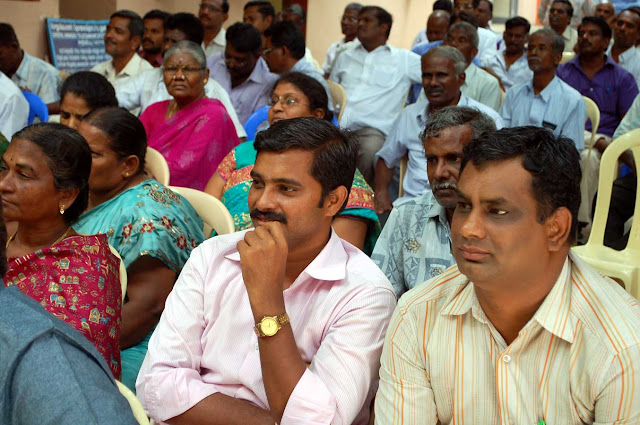 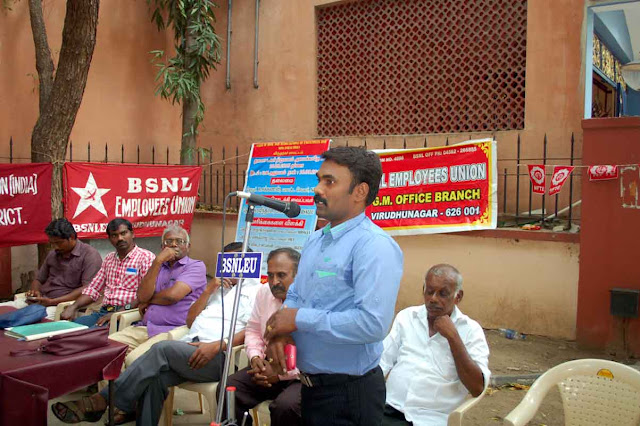 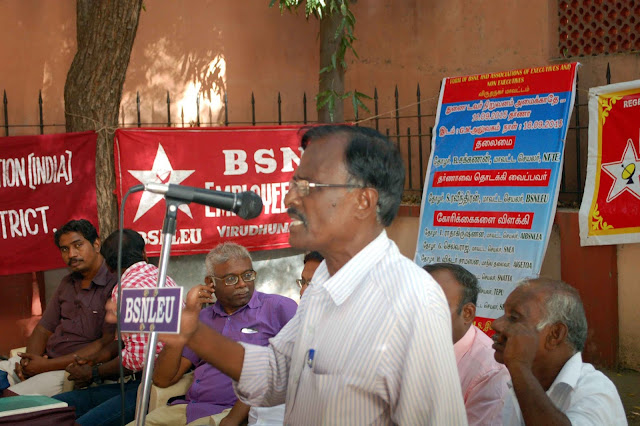 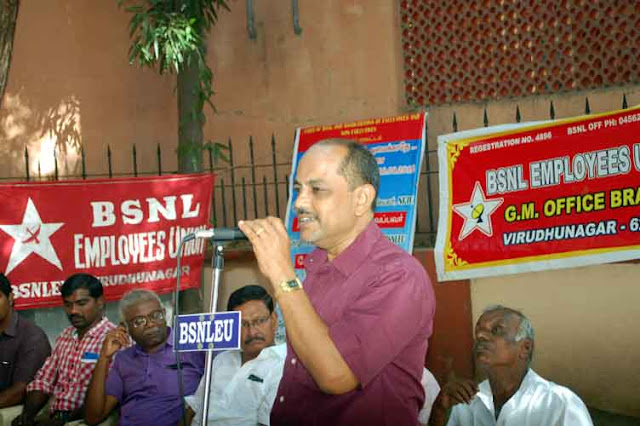 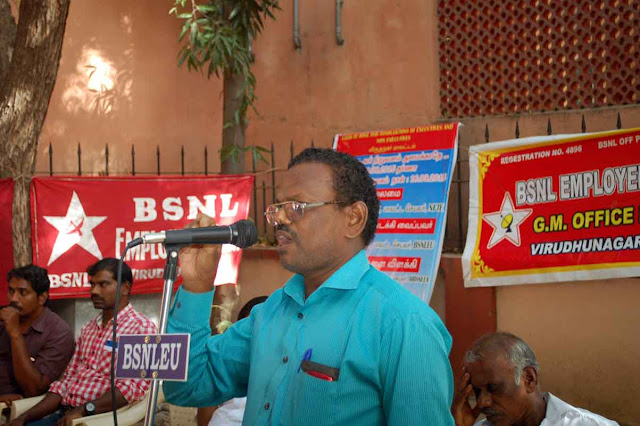 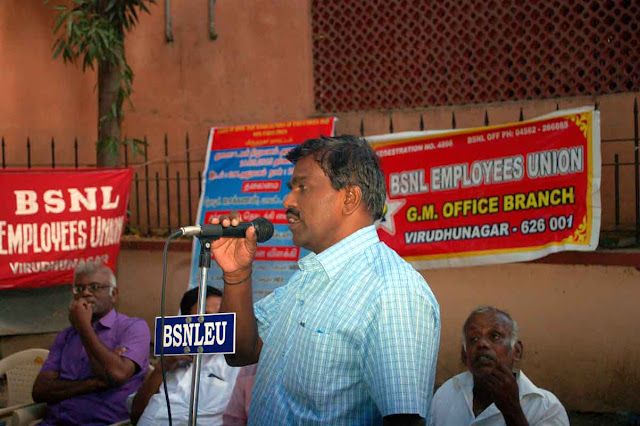 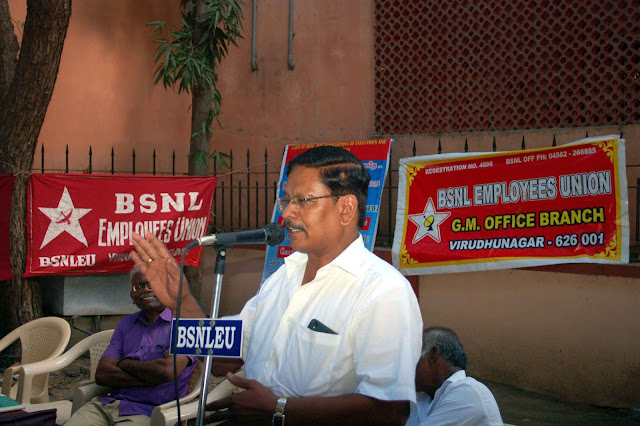 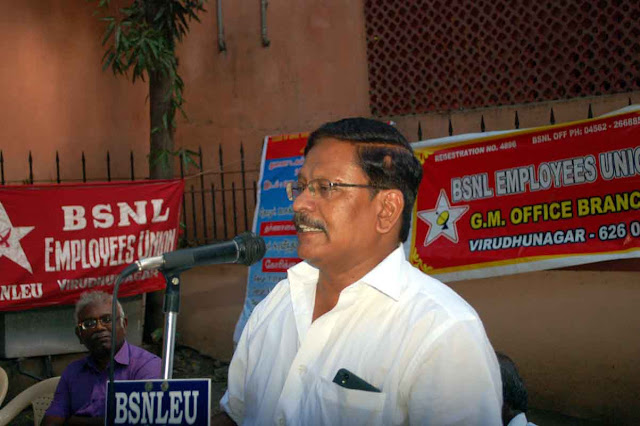 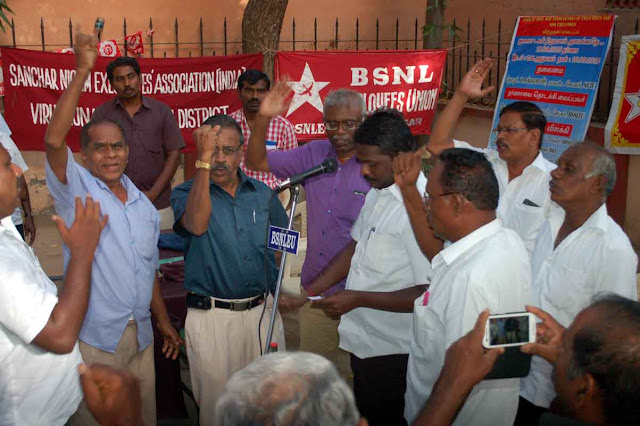 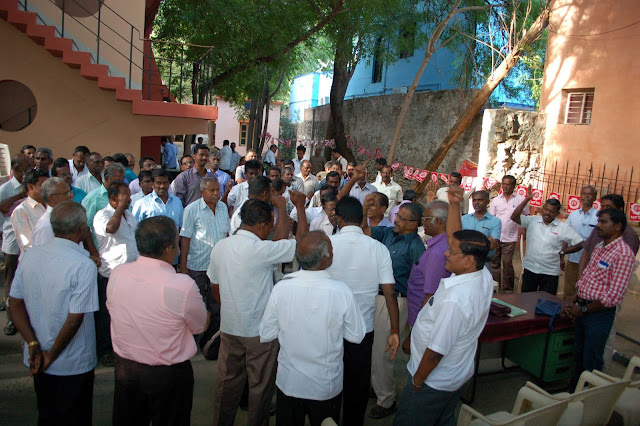 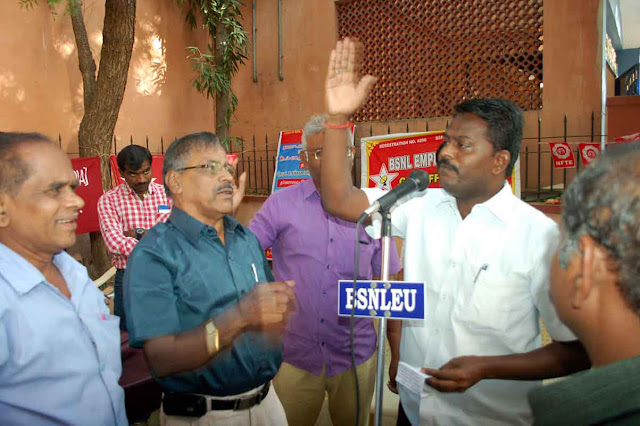 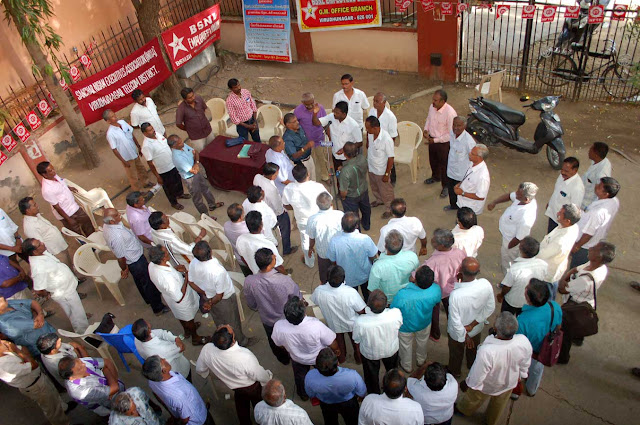 Running public sector telecom major Bharat Sanchar Nigam Ltd (BSNL) is no child’s play. But a court case around a child’s conduct is holding up key appointments at the telecom giant.In the absence of top directors for more than six months, BSNL faces the risk of delayed decisions on important strategic decisions and some of it could be critical to gaining customers or losing them to private operators.The company has been operating without director finance and director consumer mobility for the past six months. The BSNL board comprises of 12 directors, of which five (including the CMD) are full-time directors and two government-nominee directors. Anupam Shrivastava is the CMD, director consumer fixed access is NK Gupta, director enterprises is NK Mehta, director human resources is Sujata Ray.In September 2014, public enterprises selection board ministry of personnel, public grievances & pensions had selected Yojana Das, general manager finance, for the post of director finance of BSNL. However, despite clearance from all the agencies, including the Central Vigilance Commission, the case is delaying her appointment.The case involves allegations of a parent against a 12-year-old child of molesting other children at a crèche run by Telecom Women’s Central Organisation (TWCO) for the employees of telecom PSUs. Das was made party to the case as she was one of the trustees of TWCO in her capacity as treasurer.“Delay in appointment after selection can be a pressure on normal functioning of any department (including BSNL). If the case does not get resolved, the option to call for re-interview is available,” said a source in Public Enterprises Selection Board.But top officials in the communications ministry and BSNL feel it will not only delay the appointment, but also is a lost opportunity to get the best candidate. “The matter is sub judice, I cannot comment on the case. As a colleague, I can say she is one of our brightest officers,” says Anupam Shrivastava, chairman and managing director of BSNL.Some BSNL officials suggest the delay in selection of Das could end up benefiting candidates considered close to some Indian Administrative Officers. One of them said Das had also been stopped from flying out of India to meet her husband, who is abroad, pending clearance from the case. “I cannot speak on the matter. It is sub judice,” said Yojna Das, when contacted by HT.
நன்றி :-ஹிந்துஸ்தான் டைம்ஸ்
Posted by BSNLEUVR at 9:21:00 PM No comments: 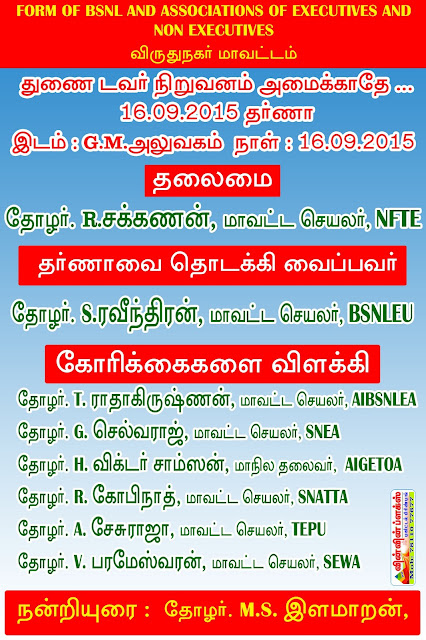 Email ThisBlogThis!Share to TwitterShare to FacebookShare to Pinterest
Labels: செய்திகள்